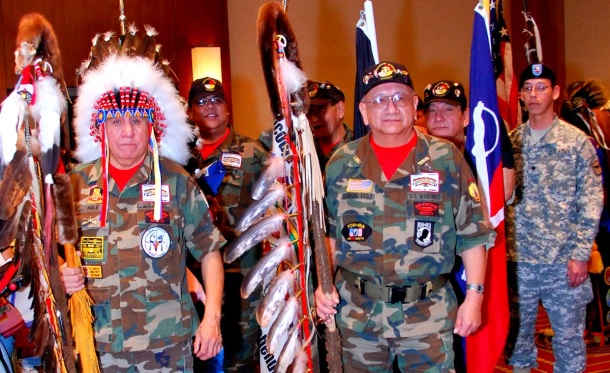 Many in our country worry narcissism and greed are submerging our culture; that the integrity of our ancestors is becoming a relic of a bygone era.

Sound familiar? This has happened to our fellow Americans before — at a much graver cost.

Native Americans today comprise a little more than one percent of the U.S. population, but before Columbus arrived 500 years ago, more than 15 to 20 million lived in thousands of tribal communities from the Arctic to the tropics. Today, Indians are rarely acknowledged at all in public consciousness. When they are, it isn’t flattering.

In popular culture, Natives are usually depicted in one of four ways — as team mascots, historic relics in feathers and loincloths, reservation drunks, or New Age mystics. Sacred symbols are desecrated to sell Victoria’s Secret lingerie and shirts at Urban Outfitters; as Tonto in last summer’s “Lone Ranger” film, Johnny Depp’s head was clownishly festooned with a live crow. Meanwhile, the outrage from the liberal grievance brigade remains underwhelming.

Indians deserve better. Despite some Natives who protest Columbus Day or Thanksgiving in an effort to detach from European-inspired customs, both cultures are deeply interwoven in our national identity. From the food we eat to our political and societal structure, our indigenous brethren have not only supplied the ingredients, they have helped with the menu: Mashed potatoes, cornbread, peanut butter sandwiches and the most American foodstuff of them all, apple pie. A perfect culinary marriage.

From the first landing in Jamestown, Europeans were shaped by tribal customs which ultimately evolved their Anglo-Saxon beliefs. Indians astonished early settlers by their lack of birthright hegemony—no kings and queens, bowing, royal palaces or special privileges. What a concept! Politically, the Iroquois Five Nations — a confederacy of the Mohawk, Oneida, Onondaga, Cayuga, and Seneca tribes — is widely believed to have influenced principles included in the U.S. Constitution and Articles of Confederation.

Even today, after centuries of fear, ignorance and genocide has decimated their numbers and influence, American Indians remain fiercely loyal to the land of their forebears. Natives enlist in the U.S. military at rates significantly higher than all other ethnic groups; serving nearly three times their percentage of the population. And they serve with pride: At any pow wow or tribal ceremony a tribute to veterans is always front and center.

Several years ago when writing for Native American Times, I asked an Arapaho filmmaker why he chose to fight for a country he feels mistreated his people. He was truly surprised, even indignant, that I even posed the question. “Why wouldn’t I?” he said, “This is my land — our land; of course we will defend it.”

Tomorrow we celebrate our national Thanksgiving. It is only right that we take the time between football games and Black Friday sales to honor our Native citizens on this most American of holidays. And should we fret that our traditions are currently under siege, they certainly could teach us a thing or two about that as well. We should listen. They have never let us down.