Too bad famous people won’t stick to what they became famous for. If you write children’s books, don’t lecture me about class warfare. An actor, dancer, comedian, football player, rock star? Entertain me. Then please oh please, just shut up.

Simple enough, but an impossibility for many famous folks these days, which is unfortunate. They don’t get it. They actually believe we care what they think when, truth is, we only want to indulge the fantasy; how disappointing to see just how arrogant, clueless and dimwitted celebs are once they turn off the microphone and remove the makeup. Worse yet, through social media, they insult many of the people who make them rich. Go figure.

Latest entry into the celebrity jackass jackpot is Jim Carrey. Remember him? He’s a mildly talented comedy actor whose fame peaked during the Clinton years. Today, he’s better known for his moribund career and being a disquieting creep: in 2011, he filmed himself lusting to procreate “chubby, little freckled-faced kids” with 22-year-old actress Emma Stone. He should’ve stopped at “Dumb and Dumber.”

But he hasn’t. This week Carrey went a step too far when he filmed and posted a short anti-gun video, “Cold, Dead Hand” mocking rural Americans and the late actor/NRA President Charlton Heston. Classy. The sophomoric ‘comedic” diatribe portrays Heston (who died in 2008 from Alzheimers disease), country music fans, gun owners and southerners as paranoid, straw-chewing bigots. You know, the type of people President Obama describes as clinging to their guns and religion. 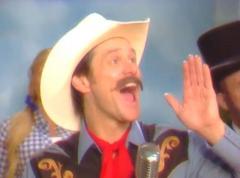 “’Cold Dead Hand’ is [about] u heartless motherf***ers unwilling 2 bend 4 the safety of our kids. Sorry if you’re offended by the word safety!” he tweeted.

Brave soul, he is, attacking a dead man—who, by the way, was a World War II aerial gunner and civil rights activist—and those who don’t live in Beverly Hills or Manhattan’s Upper West Side. Enter Greg Gutfeld, co-host of “The Five.” He tore into Carrey two days running, sparing no words:

“Carrey’s video shows what they really think of fly-over America: they hate you. To them, you’re all white rednecks. Where he mocks a dead and decent man, dude, I get you are a clown, but at least hit someone who can hit back, you simpering tool…”

Touche. And that was just for starters.

Gutfeld’s been criticized by some for overreacting to an unfunny video by a guy who’s relevance faded a decade ago. But that’s not the point. Jim Carrey gained his wealth and fame by entertaining us. All of us. Not just his Hollywood cohorts and the legions who slavishly follow group-think edicts from Jon Stewart.

From singers Adam Levine and Kanye West, to actors Jamie Foxx, Sean Penn and Tina Fey (who’s still squeezing a few more guffaws off the skin of Sarah Palin), conservative Americans are simply sick of being dissed. We’ve gone to their movies, bought their lousy songs and repeatedly assigned their offensive outbursts to uninformed narcissism.

No more. Jerks—especially those earning their comfy living off of our good will—should feel the pain of their disrespect. Whereas it would be impossible to shun the entire entertainment industry for holding leftist viewpoints, we can at least reject those who don’t have the smarts, discipline or decency to keep their big traps shut. We don’t want to hear it anymore.

As for Jim Carrey? That buffoon ain’t no Charlton Heston.