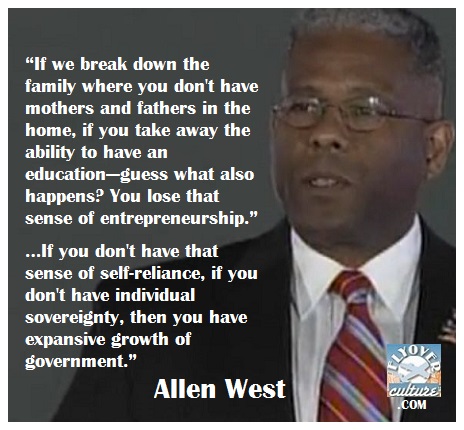 “If we’re not careful with the progressive socialist programs that they have to destroy our inner cities, to destroy and break down our families, then guess what you get?…All you have to do is look at Detroit and…go into some of the black neighborhoods in Washington, D.C. to see how progressive policies have broken down the family unit.”

It doesn’t fit the narrative. It is the massive inconvenient truth progressives in power don’t want us to think or talk about. Yet we ignore it at our peril—one look at the moral, physical and economic decay of urban America gives a dark glimpse into our country’s broader decline.

A former congressman and Marine Lt. Colonel, Allen West represents the best of the American dream: he grew up in the same Atlanta neighborhood as Martin Luther King, Jr., the son of a career Marine officer. When he speaks about the collapse of intact African-American families, you can feel the pain in his words.

West’s message—one of rebuilding communities of strong families steeped in the values of hard work, education and entrepreneurship—is the most critical challenge facing our nation today. Bar none.

But nary a peep will be uttered on this issue from the press, liberal establishment, Hollywood, or academia. All the more reason to watch and share the message ourselves: