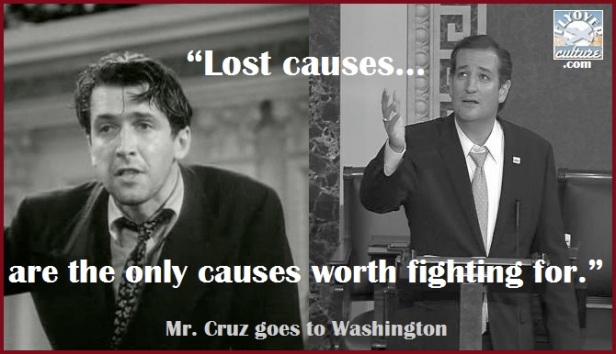 Chris Matthews calls him a demagogue, Joe McCarthy—even a terrorist! He’s mocked by liberal buffoons with little conviction and even less intellect.

It won’t work, say the lions of the right; a self-aggrandizing move by an overly ambitious freshman Senator. It’ll make the GOP LOOK BAD.

Look bad? This is the party that in a recent Bloomberg poll has a favorability rating of 34 percent—the lowest ever in their polling history—and the establishment Republicans are worried about their reputation?!

I have a better suggestion. Screen out the yapping and sneering from the talking heads and tune into a few minutes of Ted Cruz’s 21 hour speech on the Senate floor arguing against the implementation of the Affordable Care Act, better known as ObamaCare.

Just a few of his most memorable remarks:

What did you see that what so horrid, so extreme, so CRAZY?

Here’s the real deal, folks: Leftists are scared witless of Ted Cruz. Far from being the laughing stock the Dems try to portray, he’s the guy that renowned Constitutional scholar Alan Dershowitz calls “off-the-charts brilliant” and one of Harvard Law’s smartest students ever.

The American right has its new star. And like Jimmy Stewart’s character in “Mr. Smith Goes to Washington,” he understands that lost causes are the only causes worth fighting for.