“From this day to the ending of the world,
But we in it shall be remembered-
We few, we happy few, we band of brothers…”
William Shakespeare

I am not a veteran. I have never lifted a weapon in a faraway land to protect our most hallowed values and the chance for others to taste freedom.

Frankly, most of us haven’t. Yet every November we take a day to recognize the sacrifices of the brave Americans who have fought and died serving our nation.

Rather than wax poetic on the meaning of Veterans Day, I am leaving it to the pros — some who were soldiers themselves (and died in battle, like Joyce Kilmer) and saw firsthand the courage, carnage and cost of war.

Eloquent tributes to our military men and women, of conflicts domestic and foreign…

Not gold, but only man can make
A people great and strong;
Men who, for truth and honor’s sake,
Stand fast and suffer long.

Brave men who work while others sleep,
Who dare while others fly —
They build a nation’s pillars deep
And lift them to the sky

Skimming lightly, wheeling still,
The swallows fly low
Over the field in clouded days,
The forest-field of Shiloh —
Over the field where April rain
Solaced the parched ones stretched in pain
Through the pause of night
That followed the Sunday fight
Around the church of Shiloh —
The church so lone, the log-built one,
That echoed to many a parting groan
And natural prayer
Of dying foemen mingled there —
Foemen at morn, but friends at eve —
Fame or country least their care:
(What like a bullet can undeceive!)
But now they lie low,
While over them the swallows skim,
And all is hushed at Shiloh

In Flanders fields the poppies blow
Between the crosses, row on row
That mark our place; and in the sky
The larks, still bravely singing, fly
Scarce heard amid the guns below.

We are the dead. Short days ago
We lived, felt dawn, saw sunset glow,
Loved and were loved, and now we lie
In Flanders fields.

Take up our quarrel with the foe:
To you from failing hands we throw
The torch; be yours to hold it high.
If ye break faith with us who die
We shall not sleep, though poppies grow
In Flanders fields. 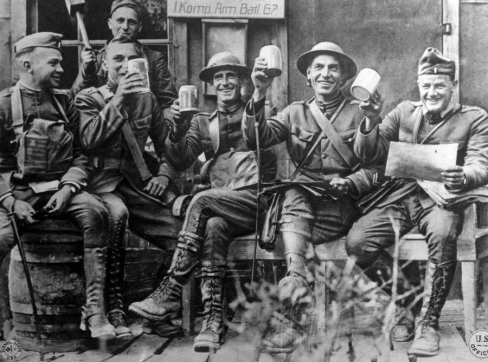 Prayers of a Soldier in France
Joyce Kilmer

My shoulders ache beneath my pack
(Lie easier, Cross, upon His back).

I march with feet that burn and smart
(Tread, Holy Feet, upon my heart).

Men shout at me who may not speak
(They scourged Thy back and smote Thy cheek).

I may not lift a hand to clear
My eyes of salty drops that sear.

(Then shall my fickle soul forget
Thy Agony of Bloody Sweat?)

My rifle hand is stiff and numb
(From Thy pierced palm red rivers come).

Lord, Thou didst suffer more for me
Than all the hosts of land and sea.

So let me render back again
This millionth of Thy gift. Amen.

The Things That Make a Soldier Great
Edgar Guest

The things that make a soldier great and send him out to die,
To face the flaming cannon’s mouth nor ever question why,
Are lilacs by a little porch, the row of tulips red,
The peonies and pansies, too, the old petunia bed,
The grass plot where his children play, the roses on the wall:

As when behind the cause they see the little place called home.
Endanger but that humble street whereon his children run,
You make a soldier of the man who never bore a gun.
What is it through the battle smoke the valiant soldier sees?

The little garden far away, the budding apple trees,
The little patch of ground back there, the children at their play,
Perhaps a tiny mound behind the simple church of gray.
The golden thread of courage isn’t linked to castle dome
But to the spot, where’er it be — the humblest spot called home.
And now the lilacs bud again and all is lovely there
And homesick soldiers far away know spring is in the air;
The tulips come to bloom again, the grass once more is green,
And every man can see the spot where all his joys have been.

He sees his children smile at him, he hears the bugle call,
And only death can stop him now — he’s fighting for them all. 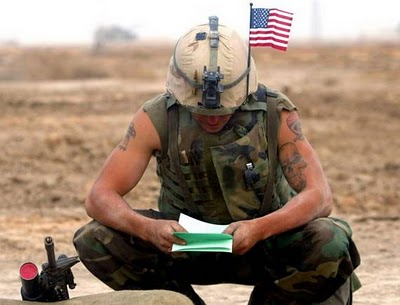 It is the Soldier
Father Dennis Edward O’Brien

It is the Soldier,
not the reporter, who has given us freedom of press.

It is the Soldier,
not the poet, who has given us freedom of speech.

It is the Soldier,
not the campus organizer, who gives us freedom to demonstrate.

It is the Soldier
who salutes the flag,
who serves beneath the flag,
and whose coffin is draped by the flag,
who allows the protester to burn the flag.