The Obama administration is at it again: Creating a moral equivalency between thugs who toss Molotov cocktails, shoot, vandalize and loot and with the police protecting the peace in Ferguson, Missouri.

Adding fuel to the out-of-control firestorm following the shooting death in the St. Louis suburb of 18-year-old Michael Brown by police officer Darren Wilson, Attorney General Eric Holder is going down to the city. As if the DOJ’s 40 FBI AGENTS (yes, you read that correctly) already on site aren’t sufficient?!

And we’re supposed to think that the DOJ and White House are unbiased?

GIVE ME A BREAK.

Decent, law-abiding Americans of all walks of life know what’s really going on here. And justice has little to do with it.

Rank politics — evident by the fact that the Democrats set up a voter registration booth on the curb adjacent to where Brown was shot — is what is at stake. And, as we all know, politics in the form of fomenting ethnic victimization and hatred is not a new tactic. Ask the Jews who survived the Holocaust. Ask the Christians in the Middle East.

Nevertheless, the demagogues on the left are in full throttle with their feverish “outrage.” On MSNBC, leftist flack Michelle Bernard even shrieked that we are on verge of committing “genocide” against young black men.

This time, however, the narrative that black men are being hunted and murdered by marauding whites just ain’t jiving with thinking Americans. We have eyes. And for anyone who lives near a major urban center, we also know the sorry, sad, deadly truth: Young African-Americans are being hunted and killed in bloody bloody numbers. But not by racist cops. By other black males born to single moms with no dads, no strong family and community support, and often a bleak future.

Author and talk show host Laura Ingraham isn’t afraid to say it, as in the following Fox & Friends interview. I’m sure she will be called a racist, an insensitive pampered lily-white prima donna.

Whatever. I’m just glad she — and commentators like Larry Elder, Jason Riley and Deneen Borelli — have the courage and moral fortitude to speak the truth. They understand that lies won’t save the lives of the thousands of teens who violently die on urban streets each year.

The liberals who exploit tragedies only to leave the wreckage behind are the real bigots. They don’t care about Michael Brown; they don’t care about the families and businesspeople of Ferguson. They care about controlling an already weakened community. And leading the pack are Barack Obama and Eric Holder. 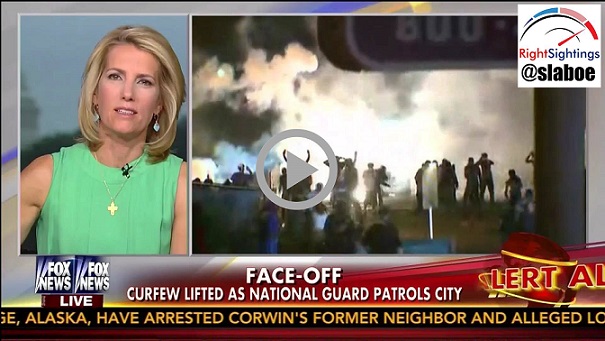