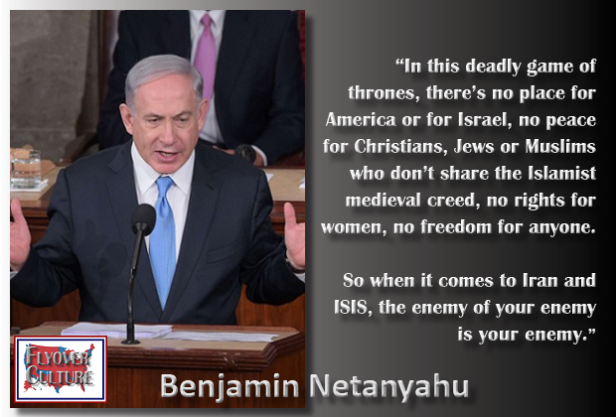 In his speech before Congress today, Israeli Prime Minister Benjamin Netanyahu did what the mainstream media has failed to do: Reveal Barack Obama for the cynical coward he is.

True, Bibi’s intent was to bring attention to the Iran nuclear negotiations which he and most Israelis fear puts their very existence at risk. He called out the ruthlessness and evil of the Iranian government with a moral clarity we never hear; he praised America’s greatness while our own President prefers to chastise us for getting “on our high horse.”

Most importantly, he implored the Administration to not make an agreement that would slow down, but hardly stop, this tyrannical regime from creating a nuclear arsenal that imperils Israel and all peace-loving people by accelerating a new arms race:

And, of course, he is absolutely right. Iran is a terrorist nation responsible for the deaths of thousands of Americans. Does any thinking adult truly believe that they will desist from their Islamist objectives after the handshakes and signatures are signed?

While Netanyahu warns of the impending global threat, Obama is spending the day launching his “Let Girls Learn” initiative. One man stands before the world, the other in front of a teleprompter. You tell me, which one of these men shows the fortitude to meet the scourge of Islamic Jihad?

We can run away and mug in front of adoring human props like the President or feel so “insulted” by the Prime Minister’s speech that we weep, like Nancy Pelosi.