In the news this week, race trumped all — with the exception of the Donald, that is. Between the white supremacist murdering nine church-goers in Charleston to the “blackism” charade by NAACP Spokane president Rachel Dolezal, the mood is tense, the country far too divided. Demagoguery runs rampant, with President Obama and Hillary Clinton using the South Carolina tragedy to fan racial animus, scorn American values and push their mantra for more gun control. Both appeared more irritated than mournful, craven versus unifying. Objectively, their cold detachment did nothing to heal the collective heartbreak expressed so eloquently by Dr. Ben Carson, South Carolina Governor Nikki Haley and Rev. Alveda King.

Meanwhile, Donald “P.T. Barnum” Trump brought his bravado to the Republican presidential race. Whatever you may think about his style or substance, he’s certainly entertaining.

This week’s edition of Friday Night Rights tackles these topics — and more — with pundits, politicians, a football great, reverend, police chief, and comedian.

Smart conservatives, smart commentary all in five minutes. What a great way to start your weekend! 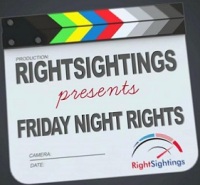